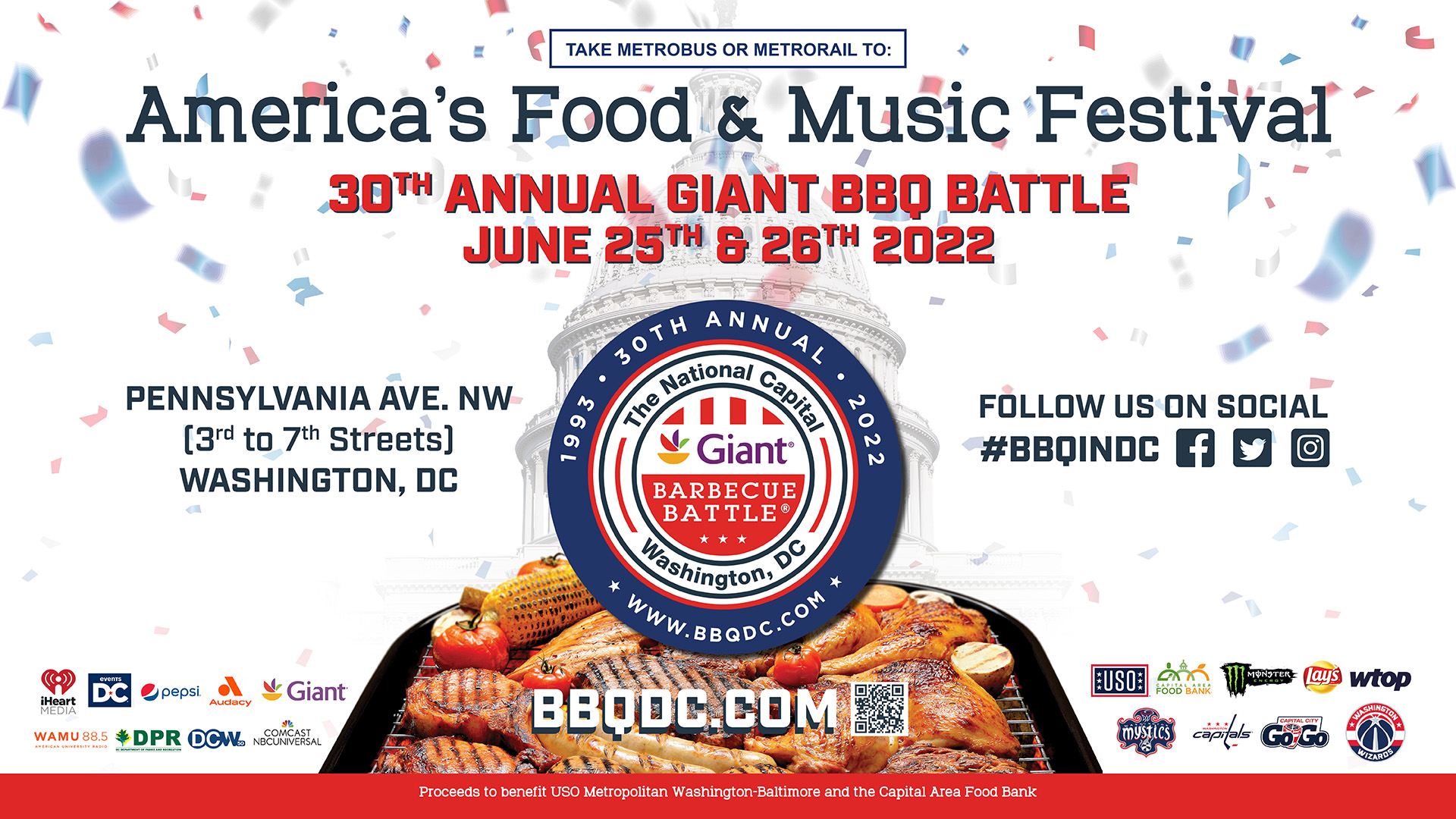 Event will feature delicious food and beverage sampling, multiple cooking competitions, live music, and more in the heart of the Nation’s Capital

LANDOVER, Md., April 27, 2022 /PRNewswire/ — For the seventh consecutive year, Giant Food, the leading greater Washington, D.C. regional grocery chain, will be the title sponsor of the 30th annual Giant National Capital Barbecue Battle. After taking place virtually for the past two years, the event will return in-person in Washington, D.C. on Saturday, June 25 and Sunday, June 26, and will benefit the USO of Metropolitan Washington-Baltimore.

“We are thrilled to be returning in-person this year to celebrate the 30th annual Giant National Capital Barbecue Battle,” said Ira Kress, President at Giant Food. “We’re looking forward to this being the best one yet and celebrating food, fun and the kick-off of summer with our local communities, all while raising money and awareness to support USO-Metro.”

The Taste of Giant Sampling Pavilion and Giant Local Flavors tent will offer a wide variety of free BBQ samples and for the perfect pairing, wine and microbrew offerings will be available for sampling in the Giant Corks to Caps tent or purchase in the Budweiser Beverage Gardens. Attendees can also get inspired by learning from the best BBQ celebrity TV chefs and pitmasters like Myron Mixon and Tuffy Stone, and watching various cooking contests such as the Military Chef Cook-Off with members of USO-Metro. The Giant Kidz Zone will feature fun for the whole family including free rides, games, sampling and more.

Through its sponsorship of the event since 2016, Giant Food has raised millions of dollars for its beneficiaries including over $1.25 million for USO-Metro last year alone. Giant customers have the opportunity to support USO-Metro beginning Friday, April 29 through June 2 at all stores by rounding up the change on their in-store purchases to the nearest dollar amount at checkout. Giant customers can also purchase coupon books for $5 at their local store, valued at over $70. All proceeds will go directly to USO-Metro.

“One group we can never turn our backs on is our military. Their lives consist of change, struggle, and sacrifice for our country,” said Lisa Marie Riggins, Esq., Executive Director of the USO National Capital District. “By putting full support behind their annual in-store Round Up campaign and the Barbecue Battle, Giant has set the gold standard for actions, not words. Thanks to Giant’s unwavering commitment to our men and women who serve, the USO has maintained troop-support without interruption. This partnership has been critical to our success.”

Tickets to the Giant National Capital Barbecue Battle are available online at www.BBQDC.com or at the event entrance. Giant customers may also visit their local store and purchase a USO-Metro coupon book which includes a coupon for a buy one ticket, get one free. Admission is free for children under 12 years old when accompanied by an adult. To learn more about the activities, check out the schedule of events or purchase a ticket, visit www.BBQDC.com.

About Giant FoodSince opening its first location over 85 years ago in Washington, D.C. in 1936, Giant has been an integral part of the communities and customers it serves. Giant is committed to being a Better Neighbor and has designated four main giving pillars that address local Food Insecurity, Military Support, Pediatric Cancer Research and Social Equality. Giant is headquartered in Landover, Md. and operates 164 supermarkets in Virginia, Maryland, Delaware, and the District of Columbia with approximately 20,000 associates. Included within the 164 stores are 152 full-service pharmacies, 83 full-service PNC Banks and 26 Starbucks locations. Giant fits all the ways today’s busy customers want to shop – whether in store or online. With 159 Giant Pickup locations and Giant Delivers available in all of its markets, customers have even more convenient options right at their fingertips to get the best products and prices, whenever and however they choose. For more information on Giant, visit: www.giantfood.com.